In the previous post I covered on the 5 Things I Hate About Using Facebook As A Traffic Source. Now, I'm gonna tell you why I love Facebook so much and therefore –> my love and hate relationship on FB.

Over the years, Facebook users have grown from few millions to a total of 1.1 billions worldwide today. It is by far one of the largest traffic sources out there (apart from Google & Bing). If you want a traffic source whereby you can scale your campaign or start making $1000/day, it is definitely one of them.

The ability of demo-targeting (age, gender, interests etc) on Facebook makes it relatively for us affiliate marketers to laser target our campaigns effective to a particular group of users. Say you have a gaming offer now and you want only people who are between the age of 15-25. You can make your ad only shown to these group of users, thus making your advertising cost-efficient. On top of that, you'll realize that your lead quality is better than you run on any other sources (except for Google & Bing of course!)

Unlike a lot of advertising networks, Facebook needs no insertion order, nor deposit before you can advertise there. By having a facebook profile account, everyone can start advertising there relatively easy. However, it could also mean more competition if you are planning to advertise on highly demanded markets (US, UK, CA, AU…) 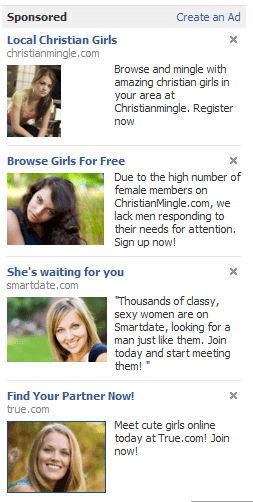 If you are an affiliate marketer, you should know that dating offers are relatively easier to make money on as compared to other verticals. Furthermore, the ability to target at gender makes Facebook a perfect match for dating offer because you can show ads like this to only male, who are single.

Apparently, it is getting harder and harder to have a dating campaign profitable on Facebook due to their strict ad approval policies. Ads that show skin, breast, or sometimes legs, are very likely to get an “Ad disapproved” message.

As difficult as it gets, if you are able to have your dating campaigns up on Facebook, chances are that you will be able to make some nice money from it (It does depend on your ad CTR, of course!).

5. The Easiest Source To Make Money On

I know not everyone will agree on this, but I find making money on Facebook is relatively easier compare to other traffic sources like PPV, Google PPC, media buy, or contextual. You don't need to have a big budget to start advertising on there. When I first started, I had $50/day budget but I slowly built up my capital from there until I hit my $26,000 in just 2 months' time. For a starter in affiliate marketing, I strongly recommend you to try out Facebook before everything else.

As much as I hate FB and as much as I love it, it still made me a lot of money. The ROI can be insane and on some good days I can achieve 200% ROI. So if you are still deciding which traffic source to try, I urge you to try out Facebook before anything else.

Stay tuned for my upcoming posts as I will be posting a lot on TIPS on how you can have a profitable campaign on Facebook.

*Disclaimer – Facebook did not pay me anything to promote them nor I own any shares of them. 😛