Marketing your CPA offers on Facebook can be lucrative when you found a winner. However, there are factors that still can harm your profitability when you see “All Green” on your tracking system like Prosper202 and CPVLab. In other words, you think you are making profits but later only to find out that you are in fact making losses.

These factors have contributed mostly to the relationship between Facebook and I – love and hate, and now I am gonna tell you why. This is important for you affiliate marketers who want to/have been using Facebook to drive traffic and take them into consideration when planning your campaigns.

This happens to everyone who uses this platform. Click discrepancy happens when Facebook tells you that they have sent you 1000 clicks but your tracking system only record 800 clicks. In other words, you are being overcharged 200 clicks.

Does that mean Facebook is trying to rip you off?

The only reason that I can say is that, when your ads are being shown, some people “accidentally” click on it, and they close it immediately before it even loads your tracking link (shown no click count on your tracker). This, however, has considered a click and Facebook will charge you on that.

On average I'm seeing 10% click discrepancy on Western countries and as high as 20% in Europe countries! I am not sure if you too, have experience this much of discrepancy but this has been my experience on Facebook.

Let's look at this example:

Let's say you have an offer that pays $6 for each conversion you make. The cost per click on Facebook is $0.50. We also assume that the conversion rate for this offer is at 10%. On your prosper, you are seeing that there are 800 clicks, and you have 80 leads. The maths goes by –

This figure is being shown on your tracker. In reality, however, the traffic that Facebook sent is 1000 clicks. So now the maths goes by –

Now you see how this can affect your ROI? And you ask me… “Hey so what can I do about this?”. Sorry there is nothing you can do about it. To fully tame this beast, you just have to bear with it, and this is why I hate Facebook so much.

*This is provided that you're already on a dedicated server and hosted your images & scripts on an ultra-fast CDN. If you have not, then you should check our my affiliate resources page.

2. Out of Geo-Targeted Traffic

Facebook determines a user's location by identifying the IP the moment he signs up, or the location that he sets in the profile. We know that most CPA offers are targeted at western countries especially US. If you run an offer that only accept US traffic, Facebook will send you traffic based on the user location that has determined earlier, regardless the user is abroad or not. If the advertisement is being shown to you while you are not in US, you will be considered as invalid click.

I'm seeing this on ~5% of my traffic. Even when there is conversion, the leads that I drove will be denied because according to the IP that they used to sign up, are not within the geo-location wanted by the advertisers (although they are from US). Worst come to worst, 5% of your traffic won't even see the offer because of geo-redirection set by your CPA network.

You might think, 5% is a small portion but imagine how this can affect your ROI when you send 10,000 clicks per day.

3. They Have No Standard Guideline On Approving Ads

If you happen to submit ads to Facebook, you should know that the ad approval process is a joke. An image that is fine for reviewer A, might seems risque for reviewer B. It is particularly true if you do dating offers on Facebook. Can you imagine you submit 100+ of ads and they just disapprove all of them without checking if they are compliance?

There are rumors out there saying that Facebook actually hire and train monkeys as their ad reviewers. A leaked image that was captured sometime ago does confirm this but how true is this… Nobody knows. What do you think? 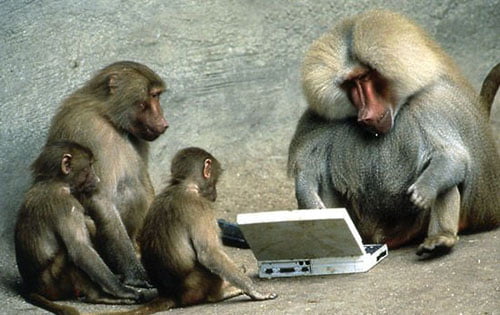 4. They Ban You For Spending Too Much / High CTR Ad

A newly created Facebook advertising account will be allocated $50 daily spending limit. In order to get your daily budget increased, you have to max it continuously for few days and the increment will often look like this:

To spend more than $2000 per day, you have to request an agency account from them. Whenever you are spending more than $350/day, your account will be flagged and the reviewers will start watching your account like a hawk. If you happened   to run some disallowed offers, be prepared to receive a warning or an instant ban. Sometimes you are running really clean affiliate offer, you might still be banned, for no reason.

What can you do?

Not forget to mention that if you have ads that have extraordinary high CTR – 0.3+, be prepared to receive retro-disapprove on your ads too, or they might ban your account. This is particularly true if you advertise in US. There is just no reason on them banning you.

The point is to achieve a balance between your spending and also your CTR. There is nothing wrong if you want to blow up your $2000/day budget but your campaign is not likely to run long if you are running offers/images that is “at the edge” in the ad reviewer eyes.

The point itself explains it all. They are making us affiliates life harder and harder. An example is that they have increased the ad shown per page from 4 ads to a total of 7-8 ads. If you are not bidding high enough, you will suffer from a poor ad CTR, and if you bid too high, you risk spending too much on the clicks.

Big brand advertisers – who can spend $100k/month with them, are the one that they want to work with.

Having said that, the above are things that really frustrate me using Facebook as a traffic source.

In my next post, I will be sharing on the 5 things I love about using facebook as a traffic source. Do come back to check it and you will know why is this love hate relationship between us. 😉